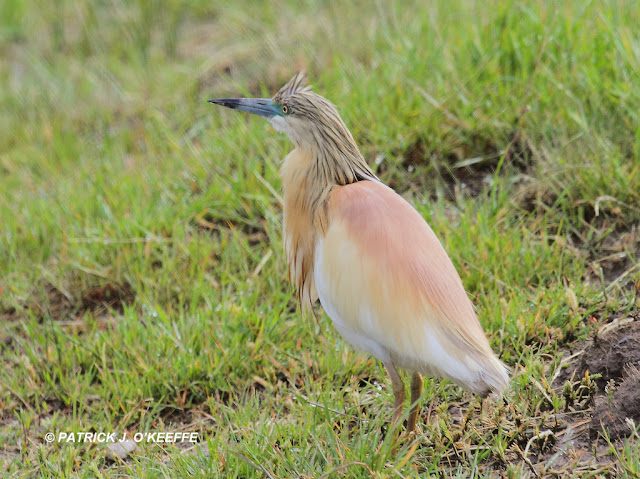 The Squacco Heron (Ardeola ralloides) is resident south of the Sahara Desert in western, eastern and south eastern Africa, including Madagascar. There is also a small population in Morocco and in Algeria on the North West African coast. This small heron also occurs as a summer resident in central and southern Europe as well as in western central Asia. In the autumn, it migrates back to Africa to spend the winter months there. Its diet includes frogs, lizards, small fish and a wide variety of invertebrates. Text © www.rawbirds.com

The White-tailed Skimmer (Orthetrum albistylum) is a Eurasian species of dragonfly. It occurs in a wide band which stretches across central and parts of southern Europe from France in the west to Japan in eastern Asia. This medium sized dragonfly has a patchy distribution but can be locally common. Warmer summers as a result of climate change has seen this species, in common with some other dragonflies, expanded its range further north in Europe.  Care needs to be taken when identifying this species as it can be easily confused with its more common relative and very similar looking Black-tailed Skimmer (Orthetrum cancellatum). It is on the wing from late May to early September. Text © www.rawbirds.com
Posted by Raw Birds at 19:24
Email ThisBlogThis!Share to TwitterShare to FacebookShare to Pinterest
Labels: Debrecen, Dragonflies of Europe, Dragonflies of Hungry, dragonfly, Hajdú-Bihar megye, Hortobágy, Hortobágy National Park - The Puszta, Hungary, Magyar, Orthetrum albistylum, White-tailed Skimmer Dragonfly
Location: Hortobágy National Park - The Puszta, Hortobágy, Debrecen, Hajdú-Bihar megye, Hungary (CLICK HERE TO VIEW LOCATION)

The Crested Lark (Galerida cristata) is commonly found across most of the temperate regions of Europe and Asia. It also occurs in northern Africa as far south as Niger. It is sedentary by nature and is only a rare vagrant outside the normal range.
Posted by Raw Birds at 12:28
Email ThisBlogThis!Share to TwitterShare to FacebookShare to Pinterest
Labels: Birds of Europe, Birds of Hungry, Debrecen, Galerida cristata, Hajdú-Bihar megye, Hortobágy National Park - The Puszta, Hungary, lark, Magyar, May
Location: Hortobágy National Park - The Puszta, Hortobágy, Debrecen, Hajdú-Bihar megye, Hungary (CLICK HERE TO VIEW LOCATION)

The Sedge Warbler (Acrocephalus schoenobaenus) is a summer resident in Europe and in Asia which migrates south to spend the winter in sub-Saharan Africa. It arrives back to it's breeding areas from Africa in late March and remains there until mid September when the return migration begins. Text © www.rawbirds.com
Posted by Raw Birds at 12:41
Email ThisBlogThis!Share to TwitterShare to FacebookShare to Pinterest
Labels: Acrocephalus schoenobaenus, Birds of Europe, Birds of Hungry, Debrecen, Hajdú-Bihar megye, Hortobágy National Park - The Puszta, Hungary, Magyar, May, warbler
Location: Hortobágy National Park - The Puszta, Hortobágy, Debrecen, Hajdú-Bihar megye, Hungary (CLICK HERE TO VIEW LOCATION)