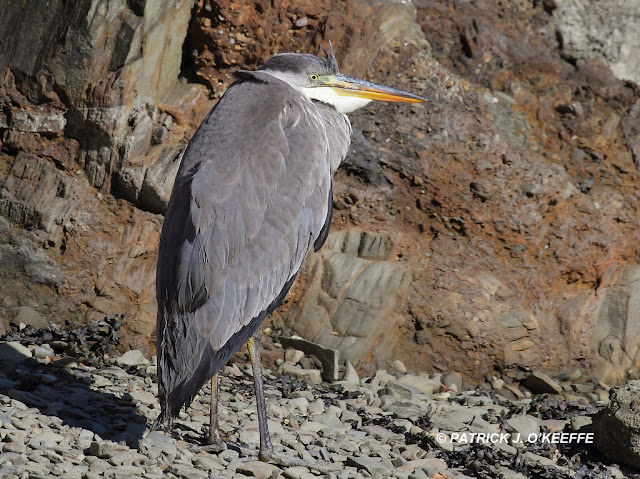 The Eurasian Reed Warbler (Acrocephalus scirpaceus) is an Old World warbler in the genus Acrocephalus. It breeds across Europe into temperate western Asia. It is migratory, wintering in sub-Saharan Africa.This passerine nests exclusively in reed beds and feeds on a wide variety of small invertebrates . Text reference
https://en.wikipedia.org/wiki/Eurasian_reed_warbler
Posted by Raw Birds at 23:51

The Eastern Imperial Eagle (Aquila heliaca) is of the family Accipitridae which is in the genus Aquila. This very large uncommon bird of prey which breeds in central and south eastern Europe as well as western and central Asia. The European population winters in north east Africa. The Asian population winters in the Middle East, northern Indian and South East Asia. Small numbers remain in the breeding areas all year round. Major prey items include hares, rabbits, susliks (a type of ground squirrel), birds and carrion.
Patrick J. O'Keeffe / Raw Birds
Posted by Raw Birds at 20:42

In the family Papilionidae, there are 225 species of Swallowtail Butterfly (as well as a number of subfamilies) and they are mainly found in the tropical regions of the world.The Common Swallowtail (Papilio machaon) occurs in North America, Europe and Asia and many subspecies are recognised. It has a widespread distribution in Europe but is absent from Iceland and Ireland. Text © www.rawbirds.com
Posted by Raw Birds at 22:37

The Eurasian Penduline Tit (Remiz pendulinus) is found in southern and central Europe as well as central and south western Asia. The northern population is migratory and in late autumn, retreats south to spend the winter in the warmer part of its range. It is generally found near fresh water with marginal trees and shrubs. It weaves an elaborate enclosed suspended nest with an angled downward facing tunnel entrance. Food items include a wide variety of small invertebrates and seeds. Text © www.rawbirds.com

There are 65 species of heron (which includes Bitterns and Egrets). The Purple Heron (Ardea purpurea) is resident in Africa and southern Asia. It is also a summer breeding resident in eastern and and western Asia as well as central and southern Europe. The northern populations are migratory and with the onset of colder weather in late autumn, they migrate south to Africa and to southern Asia to spend the winter there. This secretive species can at times be difficult to locate. Its preferred habitats are reed beds or ditches and unlike most other species of heron, it is generally no found out in the open. Text © www.rawbirds.com
Posted by Raw Birds at 14:12