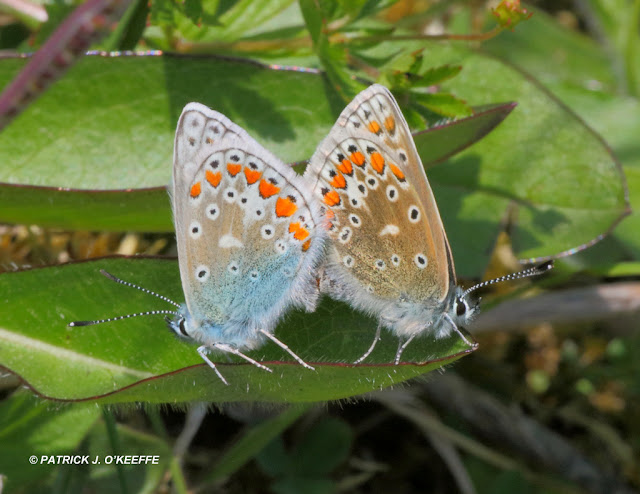 CLICK ON PHOTO TO SEE HIGHER QUALITY IMAGE
Click here for detailed species information
The Common Blue Butterfly (Polyommatus icarus) is of the family Lycaenidae which is in the genus Polyommatus. This species has a widespread distribution across the Palaearctic region and in 2005 it was found as an invasive species in Mirabel, Quebec, Canada where it has continued to extend and colonise new areas. In southern Europe, the flight season is protracted, from early March into November, over a number of generations. In Britain and Ireland, it is on the wing from May to late September, over two generations
The male has striking blue upper wings and lighter brown and blueish washed under wings compared to the female's brownish upper and under wings although her upper wings can be blueish brown in some populations. Males are very territorial and are constantly in search of receptive females. When the sexes meet, copulation occurs immediately, usually without any courtship ritual. Eggs are laid on the preferred larval food plant Birdsfoot Trefoil (Lotus corniculatus) or on plants from pea and bean family (Leguminosae). It overwinters as a larva (caterpillar) which emerges from hibernation the following season to continue feeding on its larval plant.