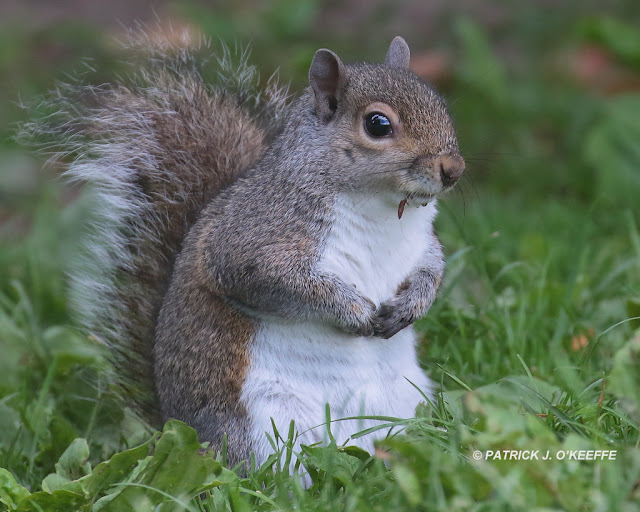 CLICK ON PHOTO TO SEE HIGHER QUALITY IMAGE
Click external link here for detailed species information
The Eastern Gray Squirrel (Sciurus carolinensis) or more commonly known as a Grey Squirrel in Europe, is of the family Sciuridae which is in the genus Sciurus. This species of tree squirrel is native to the eastern half of the USA as well as to parts of central and southeastern Canada.
It has been deliberately introduced elsewhere in North America as well as to other countries, including Britain (1870's) and Ireland (1911). It now commonly occurs throughout most of Britain. In Ireland, its range is restricted to the eastern half of the island but is now in decline due to the increase in the European Pine Martin (Martes martes) population, which is its main predator.
Patrick J. O'Keeffe / Raw Birds
Posted by Raw Birds at 21:00
Email ThisBlogThis!Share to TwitterShare to FacebookShare to Pinterest
Labels: Eastern Gray Squirrel, Grey Squirrel, Ireland, Irish Mammals, Mammals of Europe, Mammals of Ireland, Mammals of North America, Saint Anne's Park Dublin, Sciurus carolinensis, Squirrels
Location: Saint Anne's Park and Rose Gardens, Clontarf East, Raheny, Co. Dublin, Ireland
Newer Post Older Post Home