The Common Cuckoo (Cuculus canorus) is of the family Cuculidae which is in the genus Cuculus. It is a summer visitor to Eurasia that spends the winter in sub Saharan Africa as well as parts of southern Asia.
This species mimics the Eurasian Sparrowhawk (Accipiter nisus) both in size and appearance. It doesn't build a nest of its own but instead it is a brood parasite specialising in laying single eggs in the nests of other species, typicially that of Dunnock (Prunella modularis), Meadow Pipit (Anthus pratensis) or Reed Warbler (Acrocephalus scirpaceus). Its eggs, although larger, mimic the colour of the hosts eggs.
Patrick J. O'Keeffe / Raw Birds
Common Cuckoo (Cuculus canorus) distribution map 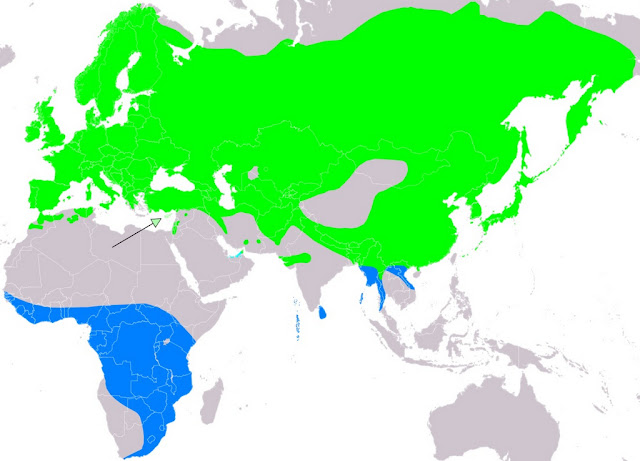 The Speckled Wood (Pararge aegeria) is a butterfly of the family Nymphalidae which is one of three species in the genus Pararge. It is commonly found throughout much of the Palearctic ecozone, but is absent from the colder northern regions.
Posted by Raw Birds at 22:26
Email ThisBlogThis!Share to TwitterShare to FacebookShare to Pinterest
Labels: Akrotiri Peninsula, April, butterflies, Butterflies of Crete, Butterflies of Europe, Butterflies of Greece, butterfly, Crete, Greece, lepidoptera, Pararge aegeria, Speckled Wood Butterfly
Location: Akrotiri Peninsula, Crete, Greece (CLICK HERE TO VIEW LOCATION)

The Egyptian Locust or Egyptian Grasshopper (Anacridium aegyptium) is of the family Acrididae which is in the genus Anacridium. In Europe, it mainly occurs in countries that boarder the Mediterranean Basin. It is also found in North Africa as well as Southwestern Asia. After hatching from an egg, an immature locust (called a nymph) goes through five moult stages known as instars and then becomes an adult. Unlike some other types of locust, this species poses no treat to agriculture. This is Europe's largest grasshopper with some females reaching up to 70mm in length and it overwinters as an adult.
Patrick J. O'Keeffe / Raw Birds
Posted by Raw Birds at 22:19
Email ThisBlogThis!Share to TwitterShare to FacebookShare to Pinterest
Labels: Akrotiri Peninsula, Anacridium aegyptium, Crete, grasshopper, Grasshoppers of Europe, Greece, Insects of Crete, Insects of Greece, locust, Moni Gouvernetou Monastery
Location: Moni Gouvernetou Monastery, Akrotiri Peninsula, Crete, Greece (CLICK HERE TO VIEW LOCATION)
Older Posts Home
Subscribe to: Posts (Atom)